The New Green Burial takes on a whole new concept!

Gas-fueled cremations and toxic burials in cemeteries are currently the only options available to Irish Funeral Directors and their clientele. But this will not forever remain the only ways we care for our dead. We all know this and there are so many options currently in prototype build, in pilot mode or a simple idea in someone’s head. So how might deceased people’s bodies be attended to, honoured, and better utilized in the future? Enter Katrina Spade from Washington State in the USA, the designer/entrepreneur behind the Recompose project.

Katrina Spade invented a system to transform a dead body into the soil while earning her Masters of Architecture. After years testing the concept, the Recompose project won the approval of Washington state’s legislature.

So what exactly is the Recompose project and what happens to the body? The unclothed body is placed into a cylinder vessel on a bed of a blend of woodchips, wet alfalfa and straw. The temperature of the body naturally rises over the course of a month and the vessel is aerated with oxygen. After one month, all that remains is soil.  The soil will be regulated as with current cremains.

While I believe it will be met with questions and I am sure Katrina has a fight ahead of her to get people comfortable with the idea, as, with all new ideas, it will be in the educating of the idea. It is certainly a fascinating conversation of how nature’s principles might be harnessed to more efficiently return deceased bodies to the earth, sequestering carbon and improving soil health. 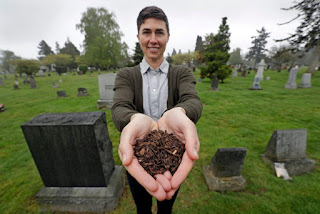 Posted by The Glam Reaper at 11:15 No comments: