Snapchat at funerals is now a thing!

The idea of using your phone to take ‘selfies’ with an app that has features like dog-faced filters and an obsession with watermelons and cat ears seems to go against the etiquette of a typical funeral in Ireland. But these times they are changing and funeral etiquette is evolving and revolving around social media as is the case with all celebrated life events.
While customisable Snapchat Geo Filters have yet to come to Ireland, they are huge in the US where birthday, wedding and other life events are celebrated. “Happy 21st Birthday Mia xx” or “Congrats Steve and Jane” are the norm but a new trend that is closely following, and indeed enhancing, the ‘selfies at funerals’ craze is the Snapchat Geo Filter at funerals – “RIP Trae” or “See you in Heaven Tyrese” along with a cartoon depiction of Trae or Tyrese are finding their place on peoples’ Snapchat stories.

One family embraced the idea when their 37-year-old brother (to Stephenie) and son died.  The Buchanons celebrated their son's life and asked friends and family to ‘snap a photo’ and swipe until they saw the words "T's World" and "We love you, Tarrence, rest in Heaven", superimposed over the taken ‘selfie’. Rather than be offended, funeral goers began taking selfies and embraced the experience.

A US company that specialises in custom Geo Filters, Buy Custom Geofilters, gets about 300 requests a month for Geo Filters and the majority of them are for birthdays and weddings. Andrew Lee, the company's founder said that over the last three months requests for Funeral Geo Filters have been on the rise. When he received his first funeral request in August 2016, he never expected that his Geo Filters would be used as tributes to the dead. "The whole, 'sad funeral' and 'everybody wearing black' isn't as common these days," he said. "People are using the funeral to celebrate the lives. Geofilters are just another step to doing that."

The millennials are a generation that grew up on social media, with a camera always in hand, it’s how they communicate and celebrate life’s milestones. Stephenie had even nicknamed her brother "the Snapchat King," before his death which is something his friends now remember fondly and the Funeral Geo Filter seemed appropriate to celebrate Tarrence’s life. 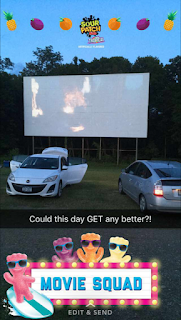