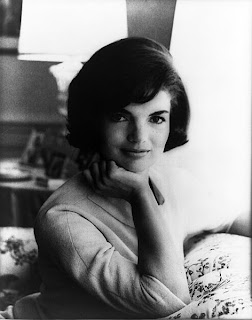 She was wife of the 35th President of the United States, John F. Kennedy until his assassination in 1963. Five years later she married Greek shipping magnate Aristotle Onassis until his death in 1975.

On that fateful day - November 22 1963 the First Lady heard what she thought to be a motorcycle backfiring but it was gunshots. The final shot struck the President in the head.

At Dallas' Parkland Hospital, she went to be by her husband's side and when a nurse stopped her and attempted to bar the door to prevent her from entering, she persisted saying "I want to be there when he dies".

Later, when his body was in a casket, she removed her wedding ring and put it onto the President's finger saying "Now I have nothing left."

After the president's death, she regretted having washed the blood off her face and hands and continued to wear the now infamous blood-stained pink chanel suit as she went on board Air Force One and President Johnson took the oath of office saying "I want them to see what they have done to Jack."

Jackie took an active role in planning the details of her husband's state funeral, which was based on Abraham Lincoln's. The service was held at Cathedral of St. Matthew the Apostle, Washington D.C. and the burial at Arlington National Cemetery where the widow lit the eternal flame (that just recently came to Ireland) at the gravesite - a flame that had been created at her request.

On October 20, 1968, mere months after Robert F Kennedy's assassination, she married Aristotle Socrates Onassis who was able to provide the privacy and security she sought for herself and her children.

Jackie Kennedy-Onassis' funeral was held on May 23, 1994 where her son John described three of her greatest attributes as the love of words, the bonds of home and family, and the spirit of adventure. She was buried alongside first husband and President Kennedy, their son Patrick, and their stillborn daughter Arabella at Arlington National Cemetery Virginia.